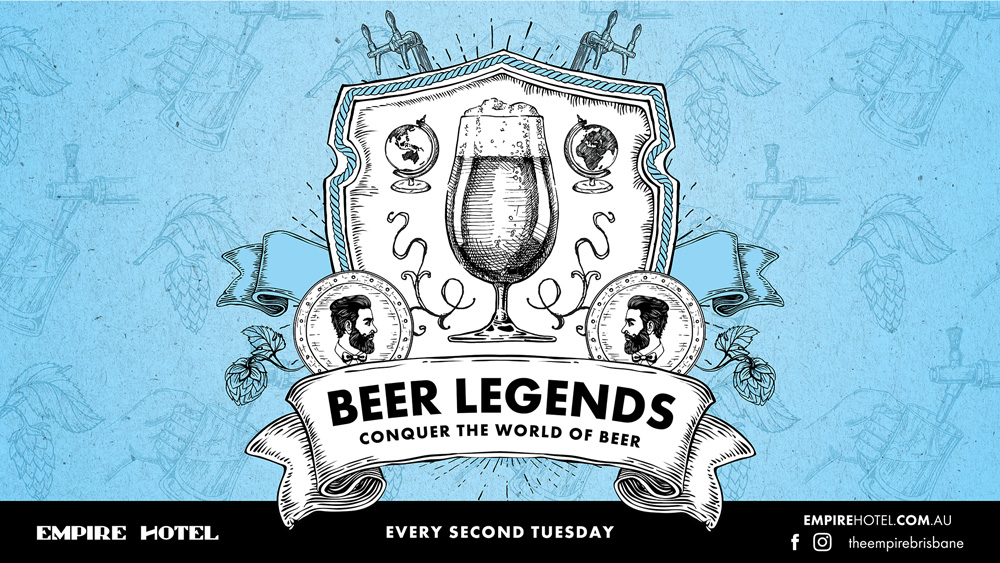 https://www.empirehotel.com.au/wp-content/uploads/2021/09/Empire-Beer-Legends_Website-Image-01.jpg 1000 563 The Empire Hotel The Empire Hotel https://www.empirehotel.com.au/wp-content/uploads/2021/09/Empire-Beer-Legends_Website-Image-01.jpg September 10, 2021 September 10, 2021
Conquer the world of beer at a fortnightly guided tasting by the faces and personalities behind the brew.

In the heart of old Fortitude Valley, there is a place where likeminded folk gather, united in their thirst for knowledge about treasured drops of golden nectar — widely known as beer.

Legend has it, a trusty guide can be found but once a fortnight at the Empire Hotel, taking locals on an intrepid beer tasting journey. Both curious and devout enthusiasts are welcomed with six generous tastings of packaged beers, before finishing off with a schmiddy of their fave brew from the night. Hungry warriors can fill their bellies with Empire’s dinner grub – some of which is available at the Eventbrite checkout.

Tickets $20 – includes a guided tasting of all 6 feature beers plus a schmiddy of your fave at the end.

Check out the upcoming dates here.